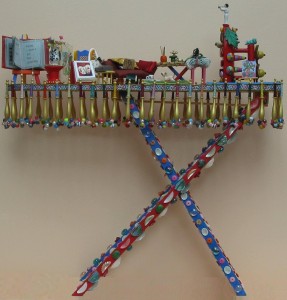 This piece, and the title for the exhibition, was inspired by Tillie Olsen, an American woman writing in the seventies. Her famous short story “I Stand Here Ironing”, a phrase that always resonated with me, is about a mother’s inability to have a proper relationship with her daughter, and suggests that the burden of housewifely tasks distracted her. She also wrote a book called “Silences” which explored the idea that women did not become great writers, artists, sculptors, scientists and so on, not because they were incapable of doing great things, but because their position in society and role in life gave them no time or energy for them. Behind every man of genius there had to be a wife looking after him. At that time, Tillie Olsen was a revolutionary. I was brought up believing that I couldn’t do all sorts of things because I was female. And even if I could, my mother warned me: “You’ll have to learn to be stupid if you want to get a man”. This was not unusual in the fifties and early sixties. She thought she was helping me get through life.

Why the ironing? I don’t feel that this is as significant now as it was then. People don’t iron as much as we used to. I helped my mother with the ironing, as with other household tasks. It took us two evenings a week, three hours each, to get through it. Shirts for five boys and a man, clean sheets every week, tablecloths, underwear, towels – it was an enormous amount of work. I wanted to dedicate this piece to my mother, so when I saw her last year I took a photograph of it to show her. She is 96 now and in a carehome. She couldn’t quite work out what it was, but her one heartfelt comment was: “That looks like an awful lot of work”! Some years ago, after expressing her delight in my artistic creations, she said to me: “I’m so glad you escaped”.