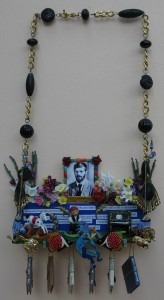 inspired me through his poetry and short stories rather than his novels. That’s why I have put his six most famous novels as danglers with locks on them. On his shelf I have put my favourite poems: “Snake”, “Piano”, “Lilies in the Fire”. I have put quotations from his poems on the back of his shelf. “Love is the great Asker” is my favourite. The gypsy is for his short story “The Virgin and the Gypsy” and the flowers everywhere because he often wrote about flowers. D.H. Lawrence’s connection with the natural world and his writing about sexuality as a force of nature, his recognition of life and death in everything, his courage and integrity in the face of ill-health, criticism and lack of understanding of his work, his sense of his roots (the necklace represents his coal mining background), his passion, his relationship with a German woman when all Germans were thought to be spies, his colourful, passionate writing, all make me include him as a deeply inspirational writer and painter. He believed profoundly that instinct and intuition were the most powerful forces. “What the blood feels, and believes, and says, is always true.”