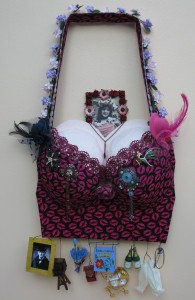 The photograph of the young masher is of Winston Churchill, who was very fond of the Musical Hall. He was instrumental in tearing down the barrier erected at the Empire Theatre between the ladies of the night and the young men in the gallery. Marie Lloyd had a great hit with “The Boy I Love is up in the Gallery”… holding a photograph when she sang it and directing her attention to a particular ‘boy’. She could have sung it to Winston Churchill.

My father told me that his mother knew a music hall song for every situation and character, and would sing them, wherever she was, at the drop of a hat. I’m glad I’ve got some of her genes. I love Marie Lloyd for her cheekiness and her feistiness. She supported the strike of Music Hall performers for higher wages, even though she was not on low pay herself. When she was asked by the Licensing Committee about singing risqué songs, she sang her usual songs ‘straight’, without innuendo, and then “Come Into The Garden Maud” giving it her all, using this as an argument that any interpretations were in the minds of the listeners. They renewed the Music Hall’s license.

The ‘drawers’ represent her dancing, which featured high kicks and much exposure of underwear. The parasol was her trademark. If she couldn’t get it up she’d say “I haven’t had it up for ages”. Marie Lloyd only had one child (hence the pram). The birdcage is for “My old man said follow the van” a favourite of mine and according to Dad a scenario he knew well; the bottles and the pub sign indicate Marie’s sad descent into alcoholism (perhaps the result of having two abusive husbands), the camera is for “Among My Knickknacks” a song about a camera which always manages to take pictures that cause a blush. The parrot comes from the song “And the Parrot Said”:

I loved music hall songs as a child, hearing them on the radio, when I only knew in a vague sort of way that they were ‘naughty’. Their simplicity and strange kind of innocence, a bit like Donald McGill seaside posters, or Beryl Cook’s paintings, are what make them so joyous. She appeals to the unashamedly blowsy tart still buried in me somewhere.