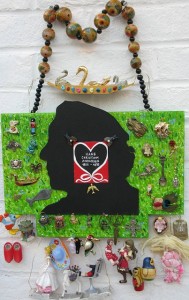 Hans Andersen was a very strange man, not to everyone’s taste. He used to invite himself to stay with people he didn’t know all that well (he was often hard up) and then outstayed his welcome because his behaviour was so anti-social. His story about the ugly duckling is really about himself. He certainly as an adult saw himself as a swan, hence the placement of the swan in the boat as if it were a crown.

I have been haunted by his story “The Snow Queen” from the first time I read it as a young child, so that takes pride of place in the danglers. It is a story in seven parts, each one illustrated. Other stories shown are “Thumbelina”, “The Red Shoes” (another gripping and terrible story), “The Little Mermaid”, “The Nightingale”, and “The Emperor’s New Clothes”. I have made the background to Andersen’s head a meadow with all sorts of objects on it, to represent two major aspects of all his stories – the natural world, and ordinary, often small household objects, with occasional exotic keepsakes, which he brought to life; also to show how fertile his mind was, teeming with ideas and images. His stories sometimes veer off in unexpected directions and often contain stories within stories. His head is in silhouette and the scissors are also there to remind us that he was very gifted at paper-cutting, often introducing himself by telling a story while he cut out a silhouette picture.