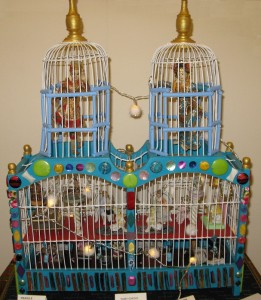 I first had the idea years ago to make a piece about girls kept locked up in a cellar. I even imagined what the cellar would look like. But I couldn’t work out how to do it. You could only see into a cellar if it was open, which rather defeated the purpose – the girls could escape from a cellar that had no ceiling, or one side open. Then I came across the ‘fairy castle’ at a craft fair, in quite a dilapidated state, and saw that it would be the answer, as the girls would already be in a cage with no way out. The main floor is where the family lives their luxurious life, and the upper storey is the home of their gods. Even though the main floor is completely separate from the cellar, there is a hint of the misery and exploitation below in the sculpture the family displays on a pillar.

Looking for dolls for the girls in the cellar, I came across the three little “Frozen Charlottes”. These are quite old dolls, mostly made in Germany, and take their name from a folk ballad about a girl who goes to a dance with her young man in a horsedrawn open gig, wearing only a party dress, and freezes to death on the way.