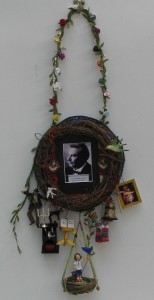 I made Pascoli for an Italian friend of mine in exchange for one of her paintings. He was an Italian poet of the late nineteenth-early twentieth century. I discovered him when on holiday in Tuscany, where he lived for the last part of his life. We found his house in the woods and I became fascinated by him, and when I got home I read as many of his poems as have been translated into English as I could find. His early life was so traumatic it affected him and his writing until he died. His father was assassinated in front of the family when Pascoli was a child, and by the time he left for university his mother and three of his siblings were dead. He always wanted to reproduce the “nest” of early family life before these tragedies occurred. He made a home with two of his sisters, and then one, who kept the house as a shrine to his memory. He was a university teacher, a translator, and a poet in Italian and Latin. He was influential in the 20s and 30s. He used the vernacular and had a most unusual style and subject matter for Italian poetry of his times. He believed that poetry should come from the child within, that it was crucial to retain the child’s wonder and delight in the natural world. Some quotations from his poems are written around the rim of the base, and the ‘danglers’ refer to some of his most famous poems.