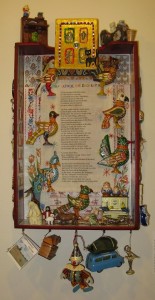 My father was a larger-than-life character, who probably influenced and inspired me more than anyone else in my life, for good and bad. I have tried to represent some of his most colourful and quirky characteristics in this piece, which was built around the poem. For instance, the vintage Dormobile dangler represents his desire, put into action during six or seven summers of camping in Europe, to give his children their ‘Grand Tour’ on a shoestring.

The clown represents his alter ego. He was a university professor of Psychology, but he told me that his true calling was to be a stand-up comedian. He certainly was a very funny man.

The ballerina, laughably far from my father in physique, as he was a sedentary, overweight man, represents a rather unexpected interest he developed in the last ten years of his life in ballet and fashion shows on TV.

The house is the Victorian, five-bedroomed, four-storey house in Bradford he bought for £1000 when he had five children aged from eight to nought. He transformed and decorated it almost single-handed (commandeering our help when necessary) from top to bottom.
He believed that anybody could do anything and often set out to prove it. (He claimed, for instance, to speak eight languages.)

The book of Impressionists represents my first encounter with painting, in his study where I spent much of my time until I was four, ‘reading’ by the fire while he did his important work. I think he subscribed to an art magazine – I certainly saw Matisse’s works there; though the Impressionists were his favourites and he taught himself to paint later in life by copying Van Gogh.

All the small decorative items represent his travels, political and other interests, and the many souvenirs he brought home.